The HIFLO trial was a Level 1, prospective, single-blind, randomised clinical trial conducted at six US sites that assessed outcomes in 100 patients with Wagner grade 1 and 2 neuropathic diabetic foot ulcers. Patients were randomised 1:1 to standard of care or mVASC plus standard of care. Rigorous, prespecified, peer-reviewed criteria were used to evaluate wound closure along with blinded independent adjudication by wound care experts. The study also assessed the quality of healing via improvements in perfusion and neuropathy. The primary endpoint was the percentage of ulcers healed within 12 weeks. Additional secondary and research endpoints included wound area percent reduction, time to closure, improvement in blood flow (perfusion), and peripheral neuropathy.

At 12 weeks, 74% (37 of 50) of the mVASC treated patients’ diabetic foot ulcers were healed versus 38% (19 of 50) in standard of care treated patients (p=0.00029). The trial additionally found that mVASC treatment increased the odds of healing by nine times. Statistically significant improvements were also demonstrated in percent wound area reduction, time to healing, and local neuropathy. Improvements in blood flow and regional neuropathy were seen in sub-studies of mVASC versus standard of care treated patients. However, additional studies will need to be performed to confirm these results in a larger population.

The HIFLO trial’s principal investigator, Lisa Gould (South Shore Health Center for Wound Healing, Weymouth, USA), past-president of the Wound Healing Society, comments on these findings: “The HIFLO trial sets a new standard for evaluating advanced wound care tissue therapies. This is one of the largest prospective randomised controlled studies of high-risk diabetic foot ulcers. Two key factors in trial design are noteworthy: 1) The trial employed a rigorous definition for wound closure consisting of predefined criteria and confirmation from an independent panel of adjudicators and 2) a rigorous standard of care that included active topical treatment in the control arm. The fact that mVASC significantly outperformed the robust standard of care used in this study speaks to the potential of microvascular tissue therapy to benefit this challenging patient population.”

“We are pleased to be recognised as one of the highest scoring submissions at SAWC Fall and proud to share the results of this foundational study with the medical community,” adds Glen Gong, CEO of MicroVascular Tissues. “The HIFLO trial demonstrates statistically significant wound healing with mVASC versus standard of care in large, deep diabetic foot ulcers. These results are attributed to treating vascular deficiencies with a vascular solution. Our commercial release of mVASC offers wound care clinicians a highly differentiated and effective microvascular tissue product for use in complex wounds.” 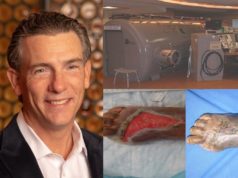