“Our aim is to establish the underlying economic and clinical case for change, identify what needs to happen and describe how we make that change happen” argued Una Adderley, director of the National Wound Care Strategy Programme, who was presenting on the current progress of the UK’s National Wound Care Strategy at the Wounds UK annual conference (4–6 November 2019, Harrogate, UK). The programme was initiated in September 2018, and Adderley reported that a lot of work has been done in the last 12 months.

Underlining how the problem of chronic wounds is growing, with current estimates showing that the spend on wound care is roughly similar to that of obesity and even cancer, Adderley, Jacky Edwards (Manchester, UK) and Leanne Atkin (University of Huddersfield, Huddersfield, UK) spoke about the size of the challenge facing the nursing community and how changes are being implemented in order to drive an improvement in care.

During her talk at Wounds UK, Adderley emphasised that the purpose of the programme, established at its inception, was to “scope the development of a strategy that focuses on improving care for pressure ulcers, lower limb ulcers and surgical wounds”. In total, lower limb wounds, surgical wounds and pressure ulcers represent over half of the wounds that are treated in the UK, with those on the lower limb accounting for 40%.

In terms of underpinning principles at the foundation of the strategy, it has been recognised that wound care should not be viewed as a separate clinical issue. Instead, Adderley spoke about the importance of collaboration with partners in other disciplines, “as it is no good just being focused on tissue viability”. Adderley continued: “We really want to aim for excellence; although we may not succeed in every care, my argument is that we still have to aim for the best or we will never get to a point where the level of care is good enough.”

Focusing on what has been achieved so far, the programme director revealed that draft levels of evidence for new products in the wound care arena are in development. “I found it quite shocking that the evidence-level for wound care products is roughly the same as a health app,” said Adderley, who opined that “you need the appropriate study design to actually test claims made, and that is not happening at the moment”.

Furthermore, the case is being made for a guideline on venous leg ulceration, while principles are also being developed for data collection. Adderley stated that data and information for wound care should be derived from national datasets, and “this information should be available across primary care, community care and secondary care, because we all need to be informed of what is going on”.

“We also need point-of-care data capture technologies and a national specification so that everyone is collecting that data in the same way. Otherwise, how do we know what is happening?” asked the presenter, who also drew attention to different work streams under the umbrella of the National Wound Care Strategy, particularly those for lower limb wounds and surgical wounds.

As co-chair of the lower limb work stream under the National Wound Care Strategy, Leanne Atkin drew attention—in a presentation at Wounds UK—to recommendations that are being developed for the care of lower limb wounds, as well as the current obstacles to improved treatment, assessment and referral for patients.

Speaking about the importance of evidence-based research, Atkin stressed that “we have to aim for meta-analyses, systematic reviews and randomised controlled trials”; there is currently limited evidence in the wound care space, while the number of high quality trials is described as “very, very small”. As the presenter pointed out to attendees, this type of study on wounds can be very difficult to control and expensive to conduct, as well as taking a significant amount of time.

Although leg wrap systems for the management of venous ulcers are not being recommended at this juncture, due to a lack of sufficient evidence, Atkin confirmed that the results of the VenUS IV trial have shown that compression hosiery kits are equally effective as compression bandaging for the healing of wounds, which presents significant benefits as hosiery kits are much cheaper and help to reduce the risk of recurrence.

Moreover, the benefits of endovenous ablation were also acknowledged during the presentation, as found by the results of the EVRA and ESCHAR trials. Regarding the EVRA study, Atkin highlighted that by ablating the veins as well as using compression, you can heal a patient 30 days quicker which, along with the findings of ESCHAR study that demonstrated a 30% reduction in the risk of recurrence, clearly supports the case for ablation.

Looking at next steps, Atkin commented: “What I challenge you to do is to stop seeing the venous leg ulcer as a simple wound: it is not. You would not go into your garden and chop off the dandelion’s head numerous times; instead, you have to think about the roots, which with venous leg ulcers are found in the venous system.”

Atkin also stated that “as soon as the wound has occurred, 20mmHg of compression should be applied, and the patient should be referred for further assessment”. The importance of an early intervention cannot be understated, according to the presenter, as this allows for a more accurate diagnosis and facilitates the escalation of patients to therapies such as compression within two weeks of initial presentation to a clinician.

The problem of surgical wound dehiscence

In her presentation at Wounds UK, chair of the surgical wounds work stream Jacky Edwards forwarded: “One of the things that we are really keen to communicate is that while we are pretty good at looking at surgical site infections (SSIs), for which there is also a really good NICE guideline, it is not always the reason for dehiscence.” Reviewing some of the other factors involved, Edwards discussed how there can be technical issues in how the wound is actually closed, what level of tissue is being closed and the mechanism used, as well as other variables.

“Often, the method of surgical closure can fail,” said Edwards, who explained that this happens because “there is too much pressure, while sutures can break through into tissues due to being placed too close to the edge of the incision or put under too much tension”. Other problems, like mechanical stress, are usually caused by the method of closure and can provoke other complications, such as oedema around the wound.

Considering the challenge at hand, Edwards commented that “understanding the size of this problem” is crucial, especially with the number of surgical operations performed in the NHS rising each year. Surgical wounds account for approximately 11% of all chronic and non-healing wounds, and mortality following wound dehiscence after abdominal surgery is as high as 35%. “Sternal wound dehiscence is even higher, at 53%, so we need to stop this surgical dehiscence,” Edwards argued.

As part of the surgical wounds work stream, efforts are being made to highlight the red flags, which includes aspects of surgical wound dehiscence that cause concern and how this information is fed back to the original surgeon. Edwards also accentuated the need for a rigorous and consistent classification system across all platforms, alongside the National Wound Care Strategy’s data work stream, which will “help guide staff and ensure patients get back to surgeons when necessary”.

Edwards concluded: “One of the key things we also identified is that there is not a validated surgical risk assessment tool, which is not for us as part of the National Wound Care Strategy for us to fix. However, I do believe this is a research problem which must be looked at for us all to understand the risks.” 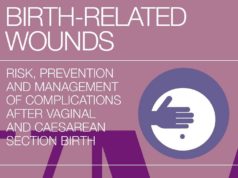