Contextualising this research, Ferris told EWMA attendees that haemosiderin has been recognised as a feature of chronic venous disease since 1992, and the literature shows that iron levels in wound fluid and biopsies from chronic wounds are higher than in acute wounds. In addition, she noted that previous studies have revealed an association of higher concentrations of haemosiderin in the peri-wound area with more advanced venous disease. “We also assume from other research that iron has a role in tissue oxygenation, and therefore would have a role in healing,” she said. “But, after a review that we [Ferris and Harding] conducted last year, there is no conclusive evidence of this in venous disease.”

Ferris, Harding, and colleagues therefore designed a pilot study to establish the relationship between systemic and wound fluid iron levels and healing in venous leg ulcers. Patients with a pure venous ulcer greater than 1cm3, which had been present for more than 30 days, were recruited. Due to potential confounding, patients with an active infection or a blood or iron transfusion within six months of the study start date were excluded. Each patient visited the clinic twice, four weeks apart. During their first visit, researchers took a blood test, wound measurements and photographs, and collected wound fluid using filter paper. At the follow-up visit, the wound dimensions were reassessed using measurements and photographs.

Plotting serum ferritin against the percentage reduction in wound area by four weeks showed a weakly positive correlation, “suggesting that there is an association between the two”, with a correlation coefficient of 0.46. Ferritin level is relevant as iron deficiency is not often diagnosed using a specific iron parameter, but instead uses ferritin. Again, the majority of patients who did not show signs of their wounds healing were anaemic or iron deficient. On the other hand, the majority of patients who did show signs of wound healing were not iron deficient.

“We did not identify any correlation between wound fluid iron level and plasma ferritin,” Ferris said. “This may be because ferritin is an acute phase protein, which is released during times of an infection, inflammation, and physiological stress. Chronic wounds are often thoughts of as those which fail to progress through the phases of healing, and can become stuck in a chronic inflammatory state, and if that is the case, then this may be enough to increase the acute phase protein release, giving a falsely reassuring ferritin level.”

Although, according to Ferris, there are a number of alternative indices in the literature that can be considered to avoid the confounding effects of inflammation, none of these have been validated in the setting of chronic wounds.

Reiterating the caveat that due to a small sample size, these data cannot be used to robustly conclude causality, Ferris says she and her co-investigators have used these data to identify associations “that will inform our future practice and research”. Observing the positive correlation between wound fluid and serum iron levels, and noting that the lowest wound fluid iron levels were seen in patients who were anaemic, she hypothesised that iron leeching was occurring. This is where iron is lost systemically via the wound.

Detailing the mechanism underpinning iron leeching, Ferris talked the EWMA audience through a schematic (Figure 1), explaining how iron complexes move between iron stores and the circulation, and can pool in the legs of patients with venous disease. If not bought back into the circulation, the pooled red blood cells can get broken down by macrophages to release ferritin, she recounted, which then converts to haemosiderin. Free iron ions can create reactive oxygen species, which can then damage local tissues, which is one of the theories as to why iron deposition can contribute to venous ulceration.

“We hypothesise that it may be that as you are losing iron from the wound fluid, you are then going to get more iron drawn in from the surrounding tissues, and deplete local stores that way,” Ferris said. “You are then also going to get more break down of iron where it pools in the legs as the tissues try to reach a state of equilibrium. This, in time, will deplete the systemic stores. We hope to be able to do more research to look at this possibility in more depth in future.”

Additionally, Ferris said that she and her team were “surprised” to find “quite a high level” of iron deficiency and anaemia in the pilot study cohort, and called for a large cohort study to establish if there is a high prevalence of anaemia in patients with chronic wounds and chronic venous disease in particular.

“We also feel that validated diagnostic criteria are needed for iron deficiency anaemia for patients with chronic wounds,” Ferris concluded, “as although the British Society of Gastroenterology guidelines do consider a high level of ferritin as still potentially representing iron deficiency in patients with chronic inflammatory states, such as rheumatoid arthritis, chronic wounds are not yet on the list of disease states where this could be relevant. As established, wounds which are not healing are often thought to be in the chronic inflammatory phase, and this therefore should be recognised as an inflammatory condition with its own diagnostic criteria for anaemia.” 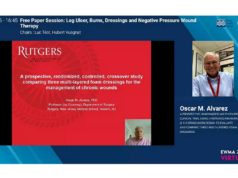