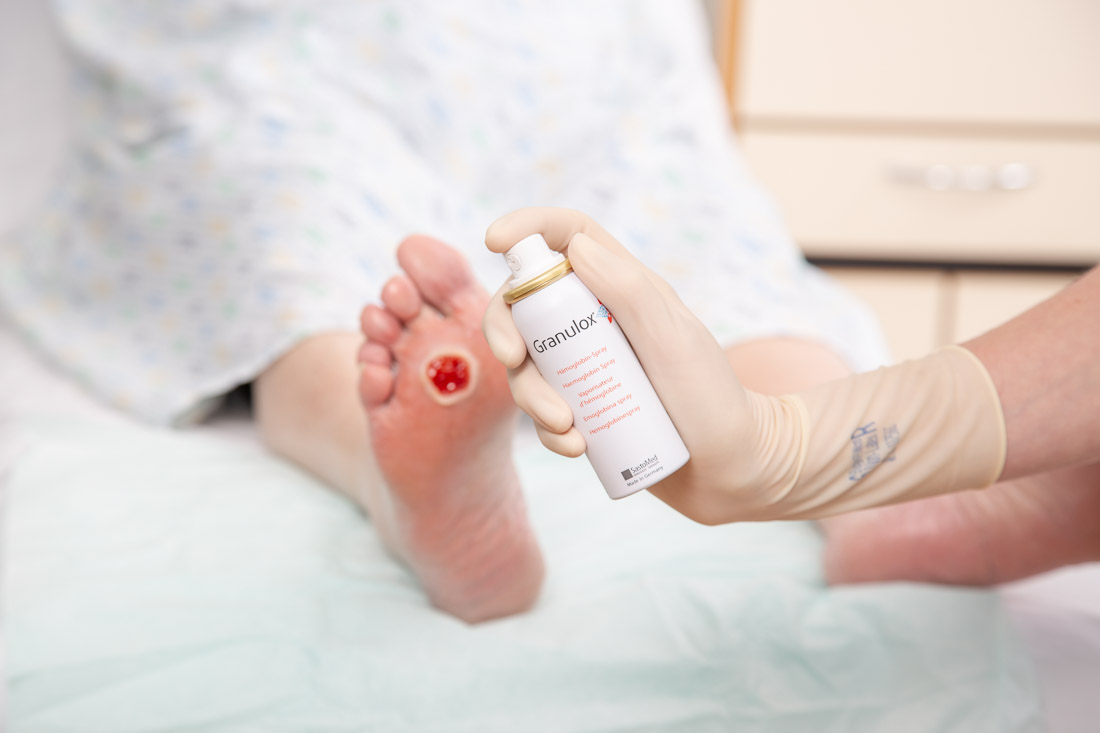 An Expert Panel report published in The Diabetic Foot Journal has recommended a new treatment algorithm for topical oxygen therapy in patients with diabetic foot ulcers (DFUs) and called for it to be considered as an adjunct to standard of care after four weeks if the wound area has not reduced by 40%.

In addition, the report advises that the early initiation of topical oxygen therapy—before four weeks—could be beneficial for patients with peripheral arterial disease (PAD), especially where there is ulcer pain, non-healing after amputation, or sloughy wounds.

There are approximately 169,000 people suffering with a DFU in the UK, 65% of which are complicated by PAD. In response to this, the Expert Panel states that advanced treatment options are needed as healing rates under standard of care are often poor. The sustained delivery of oxygen, either from the blood supply or an external source such as topical oxygen, is vital to heal non-healing wounds, especially for DFUs.

Paul Chadwick, visiting professor at Birmingham City University and chair of the Expert Panel Report, said: “The evidence for topical oxygen therapy is growing and is shown to be beneficial, improving outcomes in suitable patients. This new consensus document and simple treatment pathway provides clarity on the role of topical oxygen therapy and when it should be introduced to help manage and heal these difficult to heal wounds. The patients of biggest concern for me are those with severe ulcers, as they are four times more likely to need a major amputation and almost twice as likely to die within one year.”

One product demonstrating results in topical oxygen therapy is Granulox, a haemoglobin spray from Mölnlycke that binds oxygen from the atmosphere and transports it to the wound bed where it is released. A European Wound Management Association (EWMA) evaluation of oxygen therapies currently available in wound care awarded the haemoglobin spray a treatment recommendation of Grade 1B, indicating a positive benefit–risk value with moderate quality of evidence and very strong observational studies.

In a single-blinded randomised controlled trial on 72 patients with venous leg ulcers, the average wound size reduction was 53% at 13 weeks (p<0.01) in the group treated with the spray. By comparison, no significant reduction in wound size was seen in the control group. Studies have also shown that twice as many chronic wounds are healed at 8–16 weeks with the haemoglobin spray compared to standard of care, with shorter time (50%) to heal. More than 70% of patients have reported lower average pain scores at four weeks with the haemoglobin spray than with standard of care in chronic wounds, while 99% have shown less slough in chronic wounds after four weeks compared to 33% with standard of care.

The Expert Panel report recommends that the initiation of topical oxygen therapy for the treatment of DFUs should be undertaken by the multidisciplinary foot care service or a clinician experienced in diabetic foot care, before being undertaken thereafter by the community.

Diabetic foot disease is the most common reason for hospital admissions among people with diabetes, and DFUs cost the NHS an estimated £1 billion per year, while the additional social costs to the patient, such as reduced mobility and sickness absence, are estimated at £13.9 billion per year. The indirect costs for people with diabetic foot disease are also high, as many experience a poorer quality of life than those without foot disease. In total, 85% of amputations are preceded by DFUs, which also incur a greater risk of premature death, myocardial infarction and fatal stroke.

Speaking to iWounds News, Chadwick commented on why topical oxygen therapy should be considered as an adjunct to best practice, and how this can improve outcomes for patients: “Oxygen is a well-known requirement to promote cell metabolism and pathways for wound healing, such as the angiogenesis and revascularisation, cell metabolism and energy production, synthesis of connective tissue and infection resistance. Topical oxygen therapy, in particular, plays a vital role for the healing of non-healing wounds, especially for wounds associated with peripheral arterial disease and diabetic foot ulcers.

“Patients who could benefit from topical oxygen therapy are those with peripheral arterial disease not suitable for revascularisation or with unsuccessful revascularisation, with ulcer pain, or in patients who are not healing after amputation or have sloughy wounds. Therefore, the panel members recommended – in an updated treatment algorithm – that topical oxygen therapy should be considered as an adjunct to standard of care after four weeks if the wound area has not reduced by 40%.

“The report also looked at product innovations and reviewed the clinical data to form a basis of recommendations. Granulox (Mölnlycke), an oxygenating haemoglobin spray, is showing promising results in topical oxygen therapy. Studies have shown that diabetic patients can benefit with a reduction in their foot ulcer size when haemoglobin spray is used as an adjunct to standard care.”